A well attended meeting heard Giles G0NXA tell us about the Smith Chart and how it can be used to help match an aerial to a transmission line.  He had downloaded a program from the internet and used this to demonstrate what could be achieved with the Smith Chart.  We’re grateful to Giles for taking so much trouble to present this long delayed follow-up to his talk on aerial matching last August.

Also at the meeting, two awards  for 2015 were presented.

The John Holt G3GWW Trophy, awarded to a member performing exceptional service ,  went to Andrew (Smurf) 2E0OAV, a relative newcomer to amateur radio.  The award recognised his enthusiastic approach to the hobby,  his work introducing amateur radio to members of his Scout troop,  his involvement with Jamboree on the Air, his efforts negotiating the use of a portable site at Withington for use by CARA for the 2015 Fun Field Day and his extensive contribution to that Field Day.  The photo shows Smurf receiving the Trophy from Chairman Tony G3YYH. 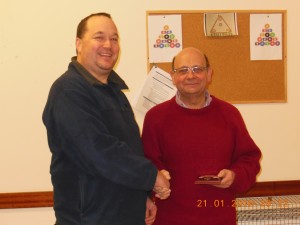 The Bernard King G3CEG Memorial Cup went to Iain M0PCB for his noteworthy and praiseworthy on-the-air activities.  He has been very active in contests.  Some examples: in March 2014 he operated as VP2MXI from Monserrat in the Caribbean for the RSGB Commonwealth Contest with much success and in 2015 he was a member of, and sole CW operator for, a leading multi-mode station in the RSGB’s IOTA contest.  Also in 2014 he was a member of the Special Event Station team at Mill Hill School celebrating the 90th anniversary of the first ever radio contact between Europe and New Zealand.  In 2015 he took part in the C5X DXpedition to Gambia which handed out very many QSOs to amateurs worldwide.  The photo shows Iain receiving the cup from Chairman Tony G3YYH. 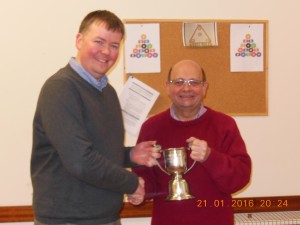 Thanks go to Mike G3LHU for manning the kitchen and providing us with much appreciated cups of tea and coffee – plus biscuits of course!