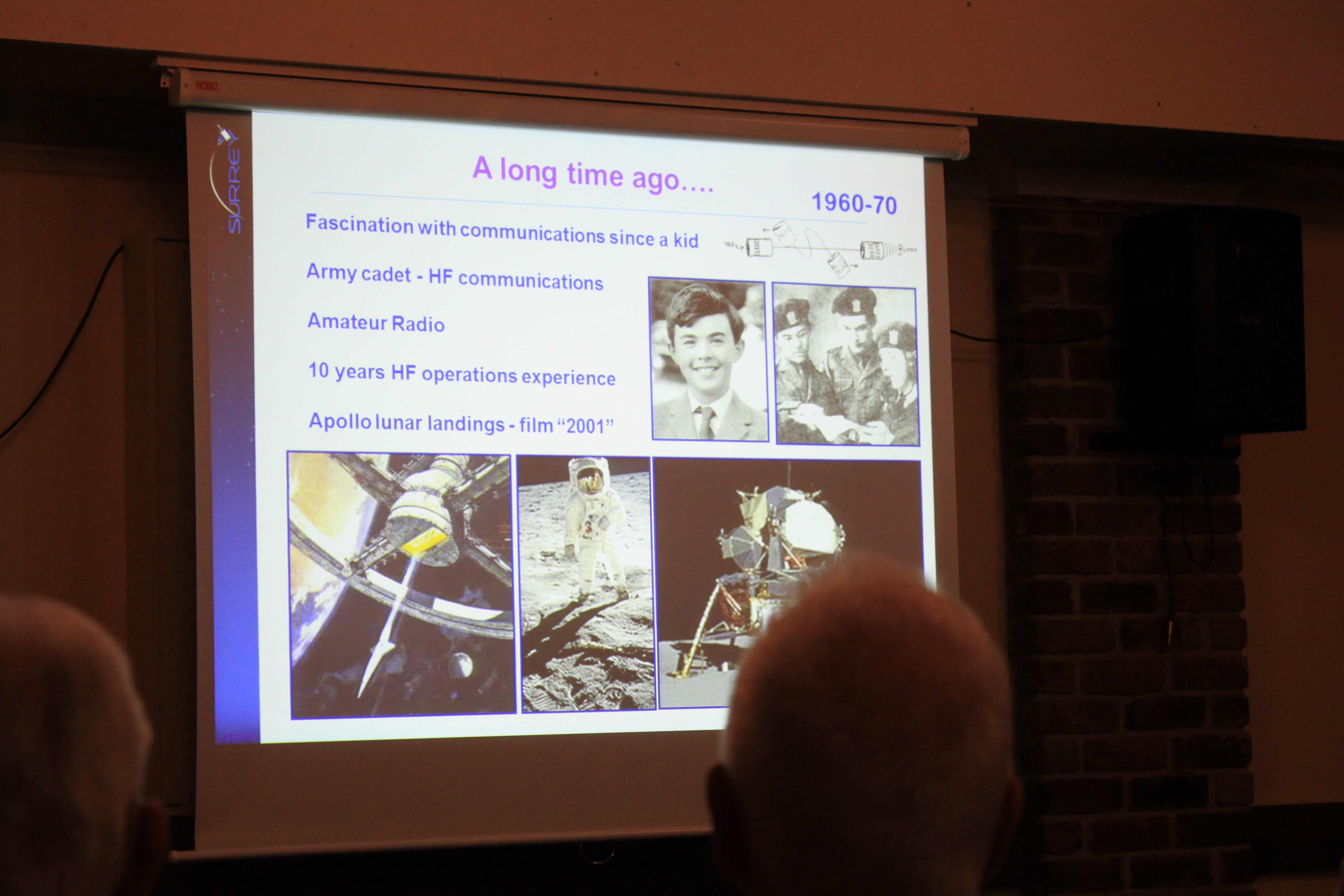 This meeting was a significant meeting. It’s not often that we welcome a Fellow of the Royal Society to speak to us, and it was a great privilege to have Professor Sir Martin Sweeting come to us. Martin (G3YJO) is Executive Chairman of Surrey Satellite Technology (SST) and Chair of AMSAT UK; he came to speak to us about constructing and launching satellites, something he’s been doing for 40 years.

In a report such as this, it’s not possible to cover all the ground that Martin did in his presentation. Martin showed us pictures of the first satellite, in the 1970s, with him and his small team of colleagues, with long hair and young energy, learning how to build a satellite and co-operate with the international space community. SST now turns over £500M and employs 500 staff, and has built and launched around 50 satellites. It’s at the top of the global game with many countries as clients and is still closely associated with Surrey University.

Perhaps it’s the anecdotes that go along with a success story like this that speak most clearly. SST has never had the funding of a NASA, so all development has a different, pragmatic focus.

How do you test your first satellite to ensure that it will still operate after the shock of launch? You put it in the boot of your car, over-inflate the tyres and drive repeatedly at speed on the cobbled High Street of Guildford.

When you need a rapidly rotating and elevating dish to receive and transmit signals to and from your satellite, what do you do? You procure a Bofors gun mount from the Royal Navy, remove the gun and replace it with a dish and other appropriate antenna. You also provide a thrill to the onlookers at Surrey University who want to see if the brick-built tower it’s being craned up to is strong enough.

When you’re struggling to find a launch vehicle, where do you go? You buy a Russian ICBM still in its underground silo for $1M; the Russians remove the warhead and modify the guidance software, and you load your satellite as a peaceful payload.

One bad day, your satellite transmitter is stuck on transmit and is blocking the receiver, so you can’t send command signals to correct the situation . . . so you approach friends who happen to have a huge dish and can use a 3MW signal to sort things out.

It was a privilege to welcome visitors from GARES and the local RAYNET group, and overall about 50 persons were present, including partners and children. Martin’s presentation was fascinating, engrossing and encouraging, encouraging that in the UK we still lead in many areas of technological development.

Martin’s recreation is the restoration of wartime radio equipment. He showed us pictures of his current project, a Wireless Set 53, which is looking great and is expected to be on-air shortly.