This is a brief report on the AGM. A fuller report will appear in an early issue of CARA News.

Twenty-five members and one visitor (who subsequently signed-up as a member) attended the meeting. 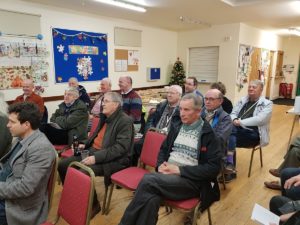 The minutes of the 2016 meeting were approved followed an amendment

The Chairman’s and Treasurer’s reports were approved unanimously.

The proposal to keep the annual subscription at £13 was approved.

The following were elected unopposed to serve on the committee for 2018:
Chairman: Tony G3YYH
Secretary: Derek G3NKS
Treasurer: Peter G3YJE

It was suggested that the club should buy equipment, especially test gear, for loan to members. Another suggestion was that a survey of members’ opinions about the club and its activities should be conducted. The Chairman said both these suggestions will be considered by the 2018 Committee.

It was confirmed that the committee was still seeking a better venue for our monthly meetings, two had been considered but rejected as being unsuitable.

The meeting closed at 20.18 following a vote of thanks to the committee for doing a good job during 2017.

After the formal meeting, we enjoyed much chat and a generously provided finger buffet and a bar.